Ogham, Runes and the Phaistos Disk in Ireland

Mysterious objects in Europe that cannot be explained by archaeologists and scholars belonged  to a shared network of subtle knowledge that can still be explained.

There was a clear  link between "secret scripts"  found on objects as diverse as clay tablets in Greece, golden coins minted by the Celts and inscriptions on massive stones: they were all designed to explain concentration.

After the enlightenment of the Buddha in India he became very famous and many people all over the world started practicing meditation.

When aware of the meditation system, the  abstract and figurative  images on objects can still be analysed and translated, because one series of numbers  was used as   short codes with which to write votive messages and to make visual notes.

These images   could be used to teach students - to help them memorise and understand the meditation techniques as taught by the Buddha, centuries before writing was in common use.

The Master key: 47 symbols on the Phaistos Disk of Crete

A mysterious   15 cm oval-shaped clay tablet with 47 different symbols pressed into wet clay was found in a hidden  basement that was plastered over at the ruins of a large  building in Crete.

Was it a Neolithic palace as described by 19-20th century archaeologists excavating the sites at Knossos, Phaistos and Mycenae - or was the building still in continuous use even until the 5th century as a learning centre before it was destroyed?

Did Pythagoras, the first to call himself a philosopher - one who loves wisdom - make the Phaistos Disk?

Did Pythagoras design the clay tablet with 47 symbols found in Crete as a tool that could be used to explain the meditation system to students?  Pythagoras learnt language and writing skills in Babylonia and Egypt and taught "metempsychosis", the Greek equivalent of Dependent Origination that was originally taught by the Buddha in India.

Confusion was caused by  Western scholars in the early 20th century when they changed the date of the Buddha's birth (624-544 BC) to 61 years later, the result was that nobody ever noticed that Pythagoras (580-500 BC) was younger than the Buddha. It is historically possible that  Pythagoras and other Greeks  from Ionia met the Buddha in person, referred to as "Yonakas" in Pali texts.

Using his skills as linguist, who studied the art of cuneiform writing by pressing into wet clay in Babylonia and hieroglyphs in Egypt, he was probably the  person who developed  "visual systems of numbers"  that was eventually used in Europe until the 12th century   to  explain the meditation system. Pythagoras, the first to call himself a philosopher - "one who loves wisdom" - is still famous as a Greek philosopher and mathematician in the 21st century.

An overview of the meaning of the images on the Phaistos Disk: a complex meditation diagram with multiple layers of knowledge - a tool to teach students not limited by language barriers.

The "secret code": only one series of numbers was repeatedly used on objects, big and small

The images can be recognised  by the numbers, the codes were used in the same order as a kind of "shorthand" for up to 1,800 years to write messages in different countries where  different local styles and materials were used, but the symbolic meaning was never changed.

The drawings on the Linear A clay tablet from Crete in the  6th century BC of the
"hanging man" has the same meaning as the  carving on the massive Ramsund stone  of the   10-11th century in Sweden, the image was also portrayed by the 16th rune of the Elder Futhark and Younger Futhork  alphabets, the   ᛋ  and    ᛦ    runes.

The "hanging man"   was used as proof that the Norse, the Danes and the Vandals from Sweden, later called Vikings, were bloodthirsty killers,  but the    image is not violent. The  man hanging on the tree of life, the fruit of his own kamma, was an instruction to meditators that they had to turn all their conventional expectations upside-down if they wanted to tame their mind. The natural law of Cause and Effect  states that bad actions will  automatically bear the fruits that will result    in a   bad quality life. The "hanging man" was an image of  a mental warrior fighting his inner defilements with the "sword of wisdom".

Newgrange, Knowth and Dowth in Ireland: to illustrate the cycle of birth, ageing and death

The  coded numbers  of the Phaistos Disk were systematically applied to design more than 400 engraved stones at Newgrange, Knowth and Dowth in Ireland. They    illustrated the meditation system through the use of abstract visual images (ideograms) that can still be  recognised and analysed. The highly abstract engravings can still be translated by investigating the numbers that form the foundation of each image, because the source of their knowledge never changed. 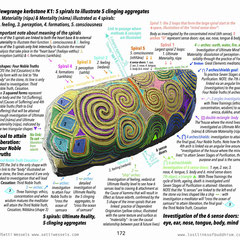 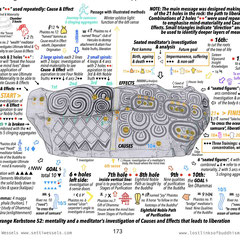 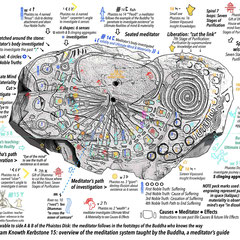 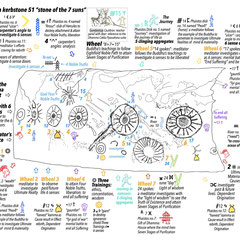 The one series of numbers as used on the Phaistos Disk was repeatedly reused to design knowledge of how the mind, the 6th sense, works - whether investigating small objects  with the concentrated mind during concentration, or when illustrating massive oversized objects  by illuminating engravings with the use of beams of sunlight - the meaning stayed the same. 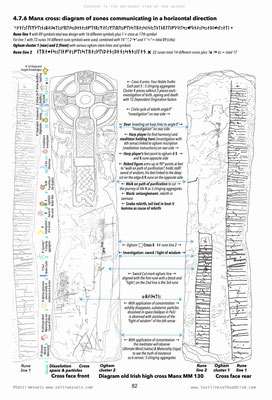 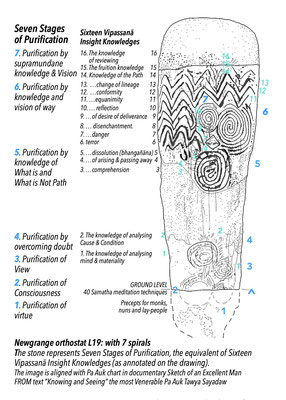 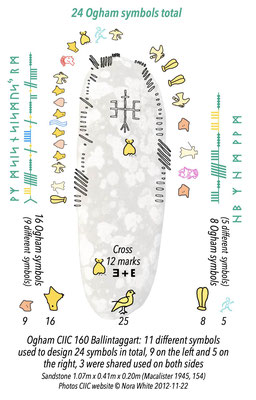 Images with complex ogham and rune inscriptions at Newgrange and Knowth, but also the old Irish High Cross located in Manx, can be successfully analysed using the definitions based on the series of numbers, an indication that  the early crosses were not made by Christians as thought, but were symbols used from as early as the 6th century BC by philosophers to illustrate the investigation of the cycle of rebirth in samsara - the "dialectics of philosophy" - until the 12th century  when expressed as the runes, the “ogham of the Norsemen”, a tradition of 1,800 years of uninterrupted meditation practice. The "Oghams" as listed in the Book of Leinster and Book of Ballymote were the illustrations that were originally used to analyse the codes engraved on stones.

What did the Romans know?

The Romans  also practiced meditation but the history was lost when libraries were burnt and texts from antiquity corrupted to remove all evidence. Roman emperor Hadrian may be the historical figure that came the closest to the the ideal “philosopher king” as described by Plato in the 10 books of “The Republic”, he rebuilt the Pantheon in Rome following the “mystic numbers of Pythagoras”, which were illustrated in detail on the one master key that was probably used in Europe for many centuries: the Phaistos Disk of Crete. The same numbers were used to design the engravings in Ireland, Pict stones in Scotland and rune stones in Orkney, Norway, Denmark and Sweden. The function of the  illustrated  Gundestrup Cauldron (c. 93-144 AD) as mnemonic device is comparable to the  stone basins and engravings of the tomb passages. 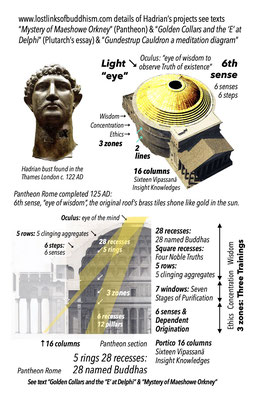 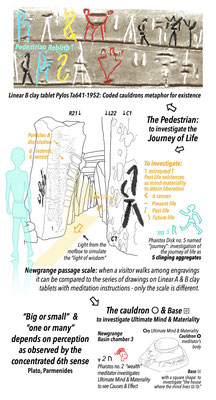 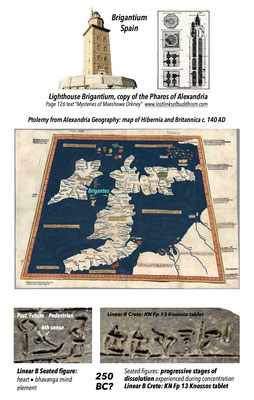 The  most intriguing discovery was that the list of  "named oghams" as illustrated in the Book of Leinster and Book of Ballymote of Ireland were diagrams that were changed when copied in Christian monasteries to introduce the new goals of their religion. The "named oghams"  were  originally    recorded in earlier texts, intended to be    used as a guide to decipher the complex engravings found at  Newgrange and other sites in Ireland, before it was changed,

The table below is a summary with short definitions of the numbers that can be  used to compare the meaning of the  different  codes as expressed by the Beith-luis-nin system of Latin letters used by Christians, the Ogham hand signs and the Elder Futhark runes, "ogham of the Norsemen".

The site of the mounds at the Valley of the Boyne, the Brú na Bóinne in Ireland, may have been a learning centre started by philosophers, the Boii from Delphi in Greece and the Milesians from the city Miletus - the legendary Milesians from Spain who supposedly invaded Ireland. The "named Oghams" were directly linked to Linear A and B scripts in Greece, there is an inscription on a Pict stone at Newton in Scotland as evidence that Kharosthi texts from India may have reached Ireland and Scotland on birch tree manuscripts in a long tradition of intellectual exchange, comparable to modern universities.

The early  history of  concentration practices  was illustrated on thousands of objects in    Europe, a history that is not lost, but was only  forgotten  after people stopped meditating.

Animated text video clips: What did the Romans know?

A few short video clips with animated text with visual illustrations  of the high quality of Roman knowledge about the meditation system.